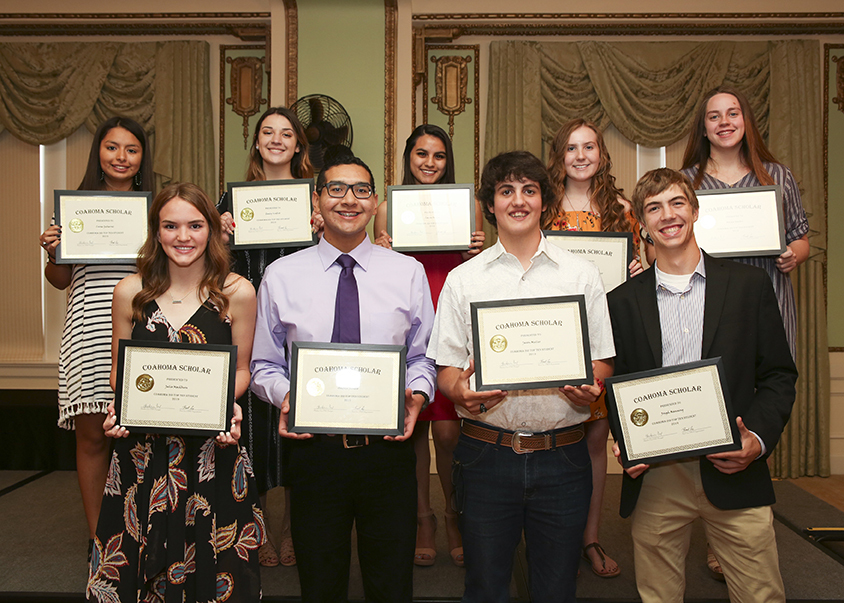 “You are what makes Coahoma the best district in the area, and we applaud the efforts that you have all given to be here today,” said Michael Brooks, outgoing CISD Board of Trustees President. “I can assure you the time, the blood, the sweat, and the tears have not gone unnoticed.”

The annual event celebrates the success of the top 10 academic students of the Coahoma High School junior and senior class.

Individually, seniors were called to the stage with their parents to be honored and received a certificate and a $400 voucher to be used to purchase a laptop or Ipad. The voucher was made possible by the banquet sponsors. Juniors received individual recognition and a certificate.

The district also honored educators who have helped create an academically rich school environment throughout the years and a graduate of the Coahoma ISD district who has gone on to have a profound contribution to his or her profession or community.

Cassie Gutierrez is the daughter of Delia Hewtty and Mitchell Gutierrez. During high school, Cassie was a manager for the boys basketball and football varsity teams and was on the varsity tennis team. She is a member of both the National Honor Society and FCCLA. In the fall of 2018, Cassie was named to THSCA’s Academic All State Football second team. She also earned her Certified Nursing Assistant certificate through a joint program with CHS and Howard College. Following graduation, Cassie will continue her education at Texas A&M University and plans to major n kinesiology.

Andrea King is the daughter of Lanny and Dornell King. Andrea is a stand-out musician and a four-year member of the Big Red Band. She made the ATSSB All-Region Band and qualified for state Solo and Ensemble all four years of high school. She received a Division I rating at State Solo and Ensemble her sophomore year. Andrea is active in FCCLA, FFA, theater, and the National Honor Society. She will attend Texas Tech University in the fall and pursue a bachelor of science degree majoring in computer science.

Emily Krabill is the daughter of Emma Krabill. During her sophomore, junior, and senior years, Emily served as the manager for the boys basketball team and was the manager of the football this past year. She is a member of the National Honor Society and Phi Theta Kappa. She was named to the THSCA’s Academic All State Football second team. She was also named to the Howard College Dean’s List. Emily plans to attend Angelo State University to major in health science professions.

Joseph Manning is the son of Jimmy and Brandy Manning. Joseph is an all-around athlete as well as a strong academic student. During high school, Joe played football, basketball, baseball, tennis, track and field, and powerlifting. He was named to the 5-3A All District Football and Basketball teams for the 2018-2019 school year and made the THSCA’s All-State Academic Football second team. Joe serves in leadership roles in many extra-curricular activities. He is active in National Honor Society, Phi Theta Kappa Honor Society, is the senior class president, and is a class officer for the student council. He is also a member of the Big Red Band drumline, FCA and participates in First Priority Bible Study. Joseph will attend Dallas Baptist University in the fall to obtain a degree in business management while running track and field for the university.

Haven Martin is the daughter of David and Felisha Martin. She was active in sports and is a member of Phi Theta Kappa. Haven has maintained a 3.75 GPA throughout her high school years. She has taken full advantage of Howard College’s concurrent classes and will graduate from college early. Haven plans to earn a bachelor’s of science degree in nursing.

Julia Mashburn is the daughter of Loyd and Marie Mashburn. She has been named the Howard County Academic Student of the Week and is on the Howard College Dean’s List. She advanced to regionals in UIL feature writing this year. She was active in track, softball and was named offensive MVP of the CHS volleyball team. Julia, a cheerleader for the past four years, was named All American Cheerleader as well as FCA All-Star Cheerleader. She is member of FFA, 4-H, One Act Play, the yearbook staff, and the National Honor Society. She is an active member in the College Baptist Church Youth Group and the First Priority Ministry Club. Julia plans to attend Blinn College to earn an associates degree in business while earning a realtor’s license to help pay for college. Julia plans to further her education at Texas A&M University to receive a bachelor’s degree.

Jaxon Muller is the son of mother, Misti Gammons, and father and stepmother, Ben and Sheena Muller. Jaxon is a member of the Big Red Band drumline and serves on the band council. He was a member of the tennis and basketball teams and the yearbook staff. Jaxon plans to attend Angelo State University to pursue a business degree and join the ASU drumline.

Andrew Romero is the son of Amy and John Romero. Andrew played on the tennis team. He has served as an athletic trainer during his high school years. He is a member of the Big Red Band drumline, the National Honor Society, FCCLA, yearbook and is a class officer. He has been an active member of FFA and qualified for state in Nursery Landscape during his freshman year. Andrew will attend Texas Tech University on a pathway to nursing. After his first two years at TTU, he plans to apply to Texas Tech University Health Care Centers and graduate with a bachelor of science in nursing.

Laura Romero is the daughter of Edward Romero and Veronica Rodriguez. Laura is a member of the band, yearbook, and FCCLA. She has participated in Academic UIL on the writing team. She has been an athletic trainer for basketball and track. She is a member of the National Honor Society. Laura plans to attend Texas Tech University as a pre-med student and major in biology. After college, she plans to focus on pediatrics.

Micah Worley is the daughter of Tabitha and Coy Worley. Micah is the Coahoma FFA Chapter President, El Rancho District FFA President, and Area 2 FFA Vice President. She was an FFA state qualifier for two years and an area qualifier for four. She is the Coahoma Band Drum Major. Micah has been a varsity cheerleader and was named All American Cheerleader for three years. She is a member of the National Honor Society. Micah plans to attend Texas A&M University to pursue a degree in animal science and then continue on to receive a doctorate in veterinary medicine. After college graduation, she plans to become a large animal veterinarian.

Doris James began her career at Coahoma in the fall of 1962 and taught third grade for most of her time employed by the district. She retired in 1991.

He recently completed his 16th year as an assistant professor of Agriculture at Howard College.  Mr. Berry teaches transfer agriculture courses and serves as an academic adviser, recruiter, and department head.

The Scholar Teacher is chosen by nominations from the top 10 academic students in the senior class. Mrs. Malone has been at CHS her entire 15-year career. She is the family and consumer science teacher. She has also taught English and theater. She was nominated by Andrew Romero and Laura Romero.

“Although all my teachers have impacted my life one way or another, Mrs. Malone has taught me the most about life and about always giving more time to others.” Andrew Romero said.

“Thank you for exemplifying what a great teacher is and I am blessed to have been one of your students.” Laura Romero said. 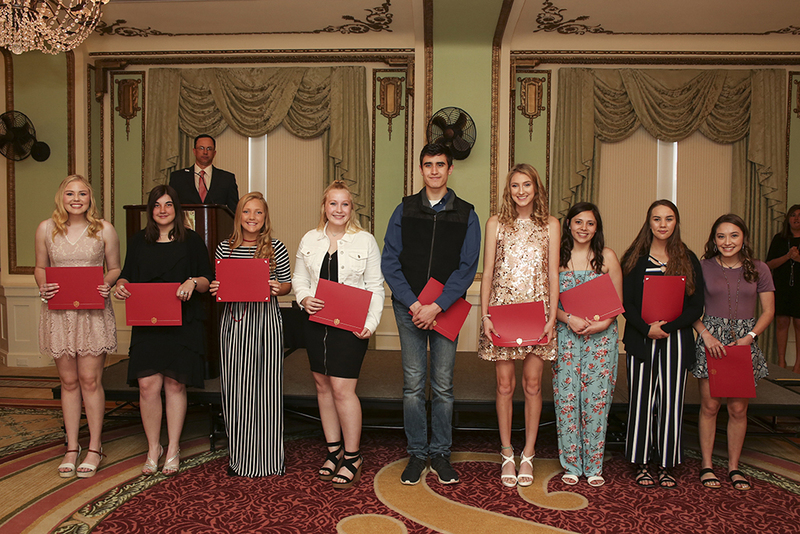