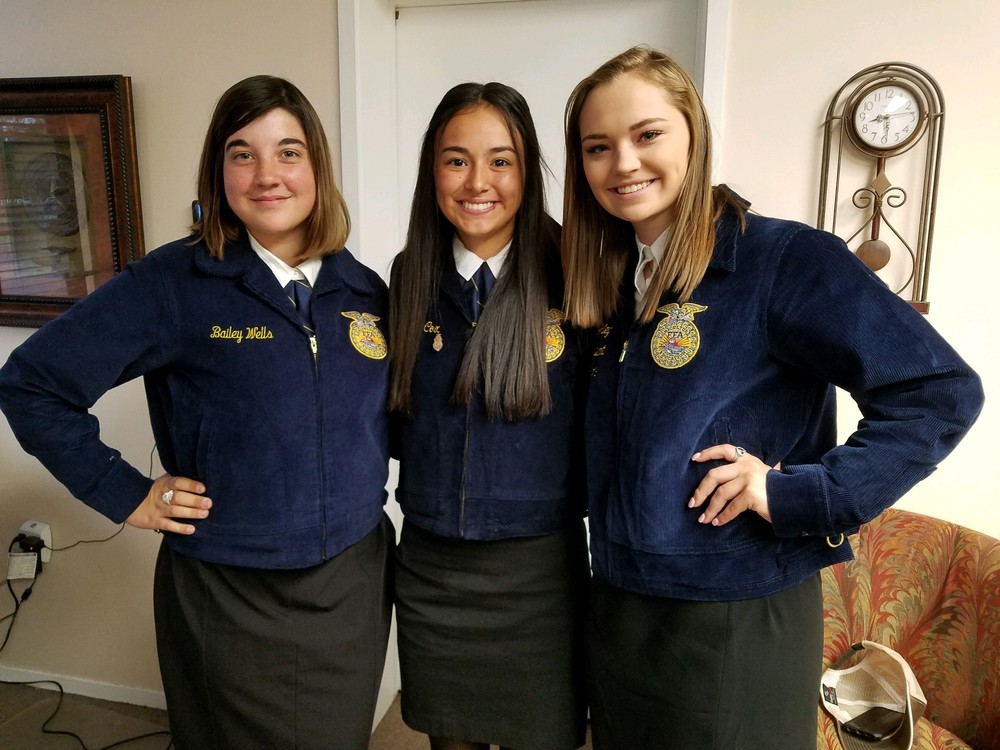 Following an impressive year for the Coahoma FFA Chapter, three members are heading to the 91st National Convention and Expo to represent the program in three very different roles.

Julia Cox, Micah Worley, and Bailey Wells will all be flying out to Indianapolis this week to attend one of the largest student conventions in the world. More than 67,000 people are expected to participated in the four-day event.

Cox will be competing against 47 other students from around the nation in the Greenhand Creed recitation contest. She qualified for the national competition by earning the Texas state championship in 2017 as a freshman.

At nationals, Cox will be required to recite by memory the FFA Creed, which outlines the organization’s belief on the agriculture industry, and then answer questions directly related the creed by the judges.

“One of the best tools we are using right now is Julia is working a lot with the freshman this year that are going to be competing in the district Greenhand Creed contest on Nov. 8,” Custer said.

Her reversal from competitor to coach has helped Cox to gain new insights into the meaning of the FFA Creed, Custer said.

“I think she is so much better today than when she won the state championship because she understands more of it,” he explained. “When you ask her the questions, it’s not so much, I just got asked a question. What is the answer Mr. Custer wanted me to say? Now her answers are starting to evolve into how she see things and feels.”

Cox is the first FFA Coahoma member to attend a national competition and the first state championship in FFA Leadership Development (LD) events under Custer’s 17-year advisorship role, however, it’s not the only first for the program this year

That honor also goes to Bailey Wells who was selected to the FFA National Band. Wells was chosen through a video audition process and will be joining musicians from around the nation to perform during the convention. She plays trumpet in the high school band and is a co-section leader.

Wells was encouraged by her father, also a trumpet player, to try out. In high school, her father, Cody, was selected to the FFA National Band. The junior CHS student also said she wanted to lead by example to encourage her fellow peers to take chances.

The road to nationals as one of 75 Texas delegates was a lengthy one for Worley.

“Micah earned her spot last year when she won an area office,” Custer said. “It’s a long process. She  interviewed with the nominating committee. She took a quiz showing her FFA knowledge, and she gave a speech in front of something like 450 to 500 kids.

“It would kill someone to go through that who didn’t have the training they’ve had but by the time they are a junior in high school and the end of their junior year, it’s just natural,” Custer added.

During the convention, Worley will serve on a committee and conference with the other Texas voting delegates.

“Texas is the largest state association at Nationals,” Custer said. “How we vote is a big thing. They will do tons of research. They will form alliances with other states to try to get things done the way the Texas feels it should go. It’s a good lesson in politics.”

A fourth Coahoma FFA member will be featured at nationals.

Emilee Custer will be the only FFA member from Texas who will be featured at We are FFA booth at the national convention. Emilee Custer’s photo and biography will be shown with students across the nation to show off FFA’s model members.

This is the largest representation of Coahoma FFA members to attend the national convention under Aaron Custer’s advisorship. Since Aaron Custer joined Coahoma ISD, the FFA program has grow tremendously. Currently, 120 students are members of the Coahoma Chapter. Last year that membership was 100.

“The program is continually changing with different participants who have different talents and interest,” Custer said. “We promote diversity, the more more diverse we can be the better our chapter is.”

Besides boasting a state champion in the 2017 LD events, the Coahoma Chapter had two teams place in the top 10 in the state their division - Radio Broadcasting and Ag Advocacy.

Aaron Custer gives his students all the the credit for the chapter’s success.

“It’s the kids more than anything,” Custer said. “They buy in and work hard. You get a really good foundation group. We just had a large group of kids at one time and they just pushed. “

“FFA is the practum. It’s putting agriculture knowledge to use,” Custer explained.  “We teach them how to sell themselves. I tell them no what matters what happens, no matter what job you are going to do, the most important thing you will ever do in your life is to sell yourself.”

Custer said the program teaches a number of value-based lessons including responsibility, service and character along with providing an insight into the fundamental importance agriculture is to our society.

“It’s about agriculture and agriculture education,” Custer said. “There is a huge place for it in these lives. It’s amazing to see a lot of these kids don’t know where their clothes come from, and they don’t know that we rely on agriculture all day, every day.

“It’s neat to see the lights come on and see them start to develop a passion not only for the FFA but for the agriculture that goes with it,” he continued. “We are making a more informed consumer out there and the kind of kid that society needs.”