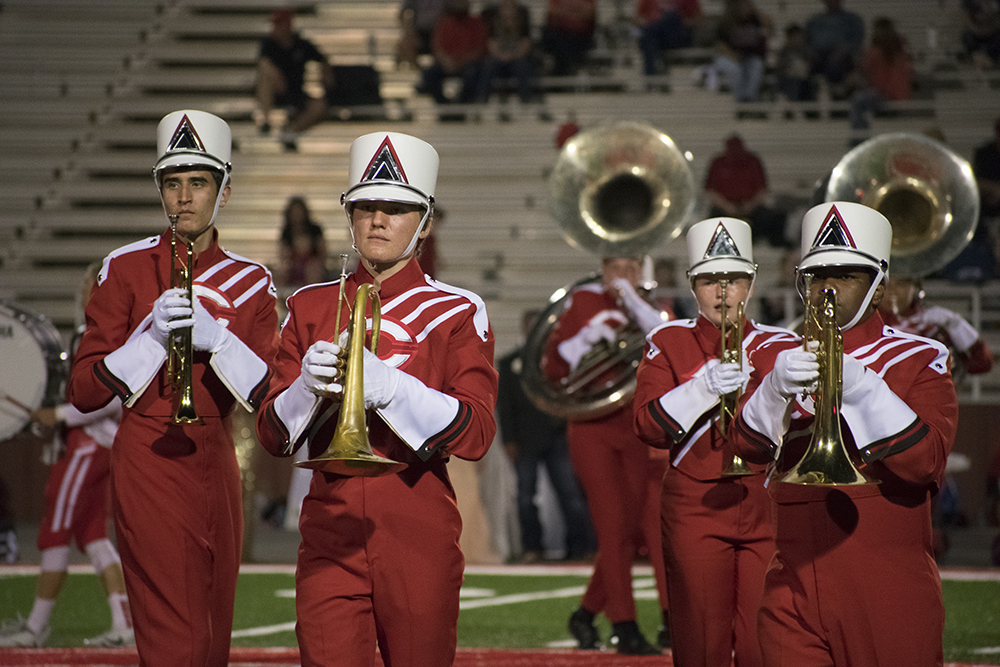 “The reason I picked this contest is that a lot of 3A bands compete at this contest” said Band Director John Landin. “Everyone we compete with is there, and also, we’ve done really well in the past at that contest.”
For this year’s show, Landin picked a challenging piece, “Dreams of Persia” by Randall D. Standridge.
“This is the hardest show I’ve done in my career,” he said. “It’s so great to see the students rise up to it. You always question, why did I pick such a hard show? They rise up to it, and it’s so awesome to see that.”
As part of the appeal for choosing the piece, the solo arrangement for the first movement was written with more than one instrument in mind, Landin added.
“I was able to open up the audition to a larger pool of players and the trumpets really wanted it,” he said. “I had really good auditions for that part and it landed with Aaron Turnbough (trumpet player).”
Senior Andrea King also performs a flute solo in the show.
Adding to the difficulty, the percussion drill design is more intricate than in past shows but with four seniors in the mix - Joe Manning, Bryson Cline, Jackson Muller, and Andrew Romero - Landin said he feels they are up to the challenge.
“We have four solid, amazing seniors,” Landin said. “Andrew has been part of the drumline his whole career here. Because he knew we were losing some leadership, he chose to go the front line ensemble. A big segment of that show is the front ensemble.”
This year’s 82-member strong band is led by Drum Majors Micah Worley, Naomi White, both seniors, and Ashley Mull, a  sophomore. Kira Landin is the assistant band director and Gina Orosco oversees the color guard.
Coahoma will head to UIL Regional contest on Oct. 20, at Ratliff Stadium in Odessa. Although 2018 is an off-year for Class 3A state marching contest, Landin said band members are just as focused on fine tuning their routine to ultimately earn the coveted Division I rating.
“We are treating this region marching contest just as seriously because it’s the first half of what we are trying to obtain - a sweepstakes award,” he explained. “This year, they are pretty hungry for it because last year we came up short in the end by one judge, and they want to get back on track with their sweepstakes. It’s been interesting to see them really pushing towards it, making sure we get this first one (at regional marching contest) in the fall and the second one at the spring concert season.”
In the past six years under Landin’s leadership, the band has qualified for area marching contest three times and earned three sweepstakes.
“We are really excited and hope everyone comes out Oct. 20 at contest and support the kids,” he said. “It will be nice and quiet and you can really hear the band play.”