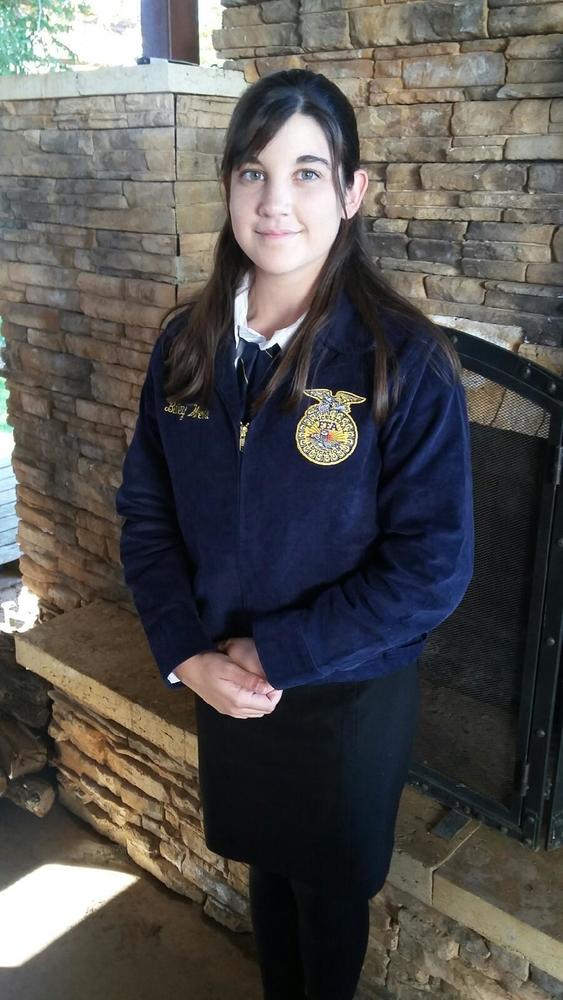 A Coahoma High School junior has been selected to perform in the national FFA Band during the 2018 National FFA Convention and Expo.

“I am really excited about meeting new people and having new experiences,” said Bailey Wells, who plays trumpet in the CHS band. “This will be my first time to get on an airplane when I travel to Indianapolis. I am excited for that, and I am excited to meet new people.”

Wells will join musicians from across the nation to perform during the 2018 FFA National Convention and Expo set for Oct. 24-27 in Indianapolis.

She is the daughter of Cody and Gina Wells and has been a band student at Coahoma ISD since the seventh grade. Her father, who is also a trumpet player, inspired her to send in the audition tape to the national FFA organization, Wells said.

“He was in the 1991 national FFA Band,” she said. “He told me about it because I didn’t know they had a national FFA Band. I looked it up on online, and I saw examples of the 90th FFA national convention and it looked really cool. It also sets an example for my section. I am a co-leader with Aaron Turnbough for the section. I feel like doing something like national band enunciates my way of being a leader.”

Although she admitted she was a little nervous to audition, she felt she needed to show leadership to encourage other students to take chances.

“Doing something like that and then following through shows commitment,” Wells said. “It shows you are a good leader. Even if you don’t make it, I feel like the experience is really good, and it helps make you a better person.”

For the past two years Wells, who plans to become a veterinarian, has participated in the Coahoma FFA chapter, a program designed to cultivate leadership through agricultural education.

“I’ve always been an outgoing person, mostly,” she said. “I was a little shy and then when I got into the FFA organization my freshman year, that really brought me out. It showed me what it takes to be a leader and how to be an effective one and how to get people to respond to you and respect you. It’s really helped a lot with band, with everything.”

In October, Wells will head to Indianapolis with fellow CHS students Micah Worley and Julia Cox. Worley is a voting delegate for Texas FFA Association and Cox qualified for national competition in the Creed Speaking contest when she placed first at Texas State FFA Leadership Contest in December 2017.

The 2017-2018 academic year was a stellar year for the Coahoma FFA Chapter. The program, which has been led by advisor Aaron Custer for the past 17 years, raked in 45 state, area, and district banners.

More than 67,000 people are expected to attend the 91st National FFA Convention and Expo making it one of the world’s largest student conventions. The convention will be held at the Indiana Convention Center.