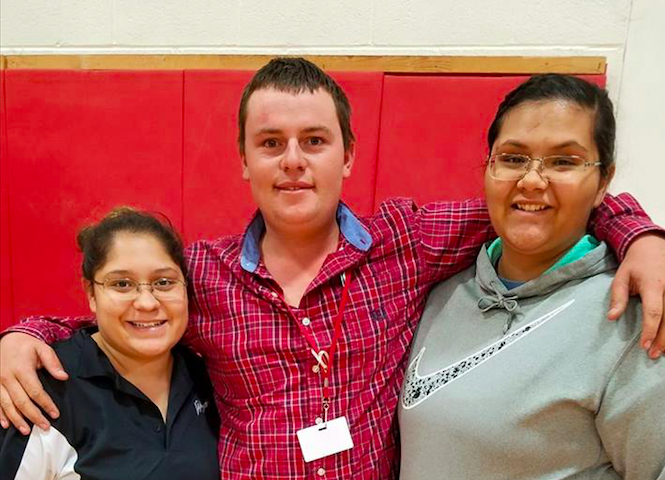 COAHOMA - Sometimes heros really do show up on their mighty steeds, or in this case a truck, to save the day.

Early this morning, Brianna Rodriguez of Odessa, a photographer with Lifetouch, was heading to Coahoma ISD to take class pictures when her car had a flat tire along I-20 right at the Coahoma city limits.

Her colleague Jessica Ramirez was driving behind Rodriguez but unfortunately for the two neither had a jack to help change the tire.

“He said he didn’t like to see two ladies stranded on the road,” Rodriguez said.

Hutchings was heading to high school along I-20 when he noticed the two young women on the side of the road by the broken down vehicle as traffic whizzed by the scene at interstate speeds.

“I was passing by them, and I just had a feeling, so I got off on the exit ramp and drove back on the service road. I drove up on the grassy area.”

After asking the two ladies if he could help, Hutchings then positioned his truck to traffic to protect the women from oncoming traffic.

“I’d rather they hit my truck than those two ladies,” Hutchings said.

Hutchings helped to loosen the lug nuts holding the tire in place to help speed the process once Rodriguez could return to her vehicle to replace the tire. He also helped move Rodriguez’s photography equipment from her car into the Ramirez’s vehicle.

Hutchings has lived in Howard County for about seven years. Besides attending school, he is a member of the Howard County Volunteer Fire Department, works full time, and is also a competitive team roper in the rodeo circuit.

And today is his 18th birthday.

When Rodriguez learned this, she offered to buy the young man a present.

“You don’t own me a thing,” Hutchings told her. “Just getting you going again is all that matters to me.”