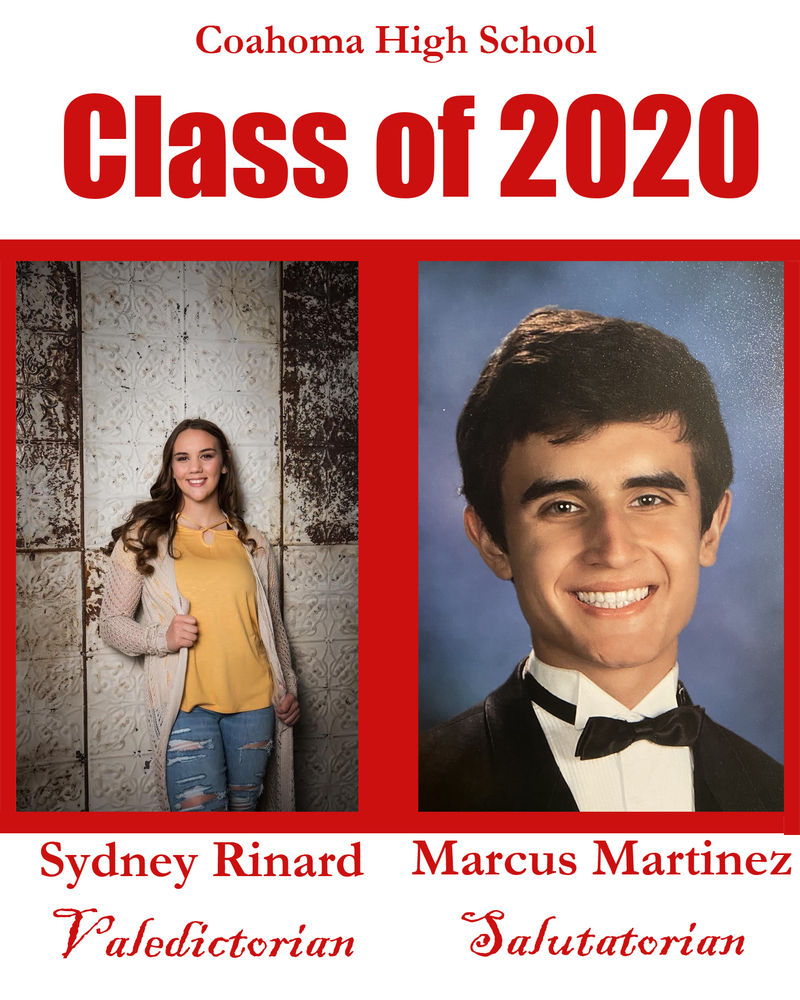 The top two students of the Coahoma High School Class of 2020 are Sydney Rinard and Marcus Martinez.

Sydney, the daughter of Jim and Tasha Rinard, has been named the class valedictorian and will further her education at Angelo State University. She plans to major in kinesiology. After completing her bachelor’s degree, Sydney plans to earn her doctorate at Parker University located in Dallas.

“In the future I plan on becoming a chiropractor and eventually someday opening up my own clinic,” Sydney said. “It has always been really important to me that whatever I do for the rest of my life has something to do with science and giving back to the community. Since my freshman year of high school, I have been set on becoming a chiropractor and that is exactly what I plan to do within the next five or six years.”

Marcus, the son of Levi Burchett and Isaac Martinez, is the class salutatorian and will head to Waco after graduation to attend Baylor University and pursue a career in dentistry.

During their years at CHS, both Sydney and Marcus have participated in band, athletics and the National Honor Society. Sydney has been a member of the FFA and student council and some of her non-school activities include First Priority and the Midway Baptist Church youth group.

“I always take my responsibilities seriously and have done my best in any leadership role I was given the honor of serving,” Sydney said. “These roles included being a drumline captain, FFA chapter officer, NHS president, Student Council officer, leader of First Priority, and also the leadership that just comes with being a senior in athletics and in my youth group.”

Both Marcus and Sydney were named a CHS top ten scholer. Sydney received the Academy of Future Physicians and Medical Scientists Award of Excellence and is a member of the Texas FFA Lone Star Degree National Honor Society.

The soon-to-be graduates offered the following advice to Coahoma students.

“If I could give a younger student advice, I would tell them to focus on what makes them happy, regardless of what anyone says,” Marcus said.

“My advice to any younger student at Coahoma is that you will definitely have more fun and enjoy your life so much more if you just be yourself and find confidence in your own personality,” Sydney said. “If you don’t think you’re ‘normal, that’s a good thing, and you will just live a better life if you stop trying to be someone that you’re not!”

Sydney also shared one of her favorite Bible verses.

“My favorite verse for a while now has been Psalm 16:8 and it says ‘I keep my eyes always on the Lord. With him at my right hand, I will not be shaken,” she said. “This verse has really spoken to me personally because I have been through quite a lot in my few years on this planet and sometimes it can be hard to stay happy and focused.

“In my head, this verse told me that it doesn’t matter how much we may think we are falling apart or how much we think we can handle, God will always have our backs as long as we don’t forget about Him,” she continued. “We, as people, have to remember that we need to allow God full control of our burdens because He knows what’s best for us, and as long as we do that, we will make it through whatever troubles are hovering over us.”

Graduation ceremonies for the CHS Class of 2020 are set for 4 p.m., Thursday, at the Bill Easterling Memorial Stadium. “