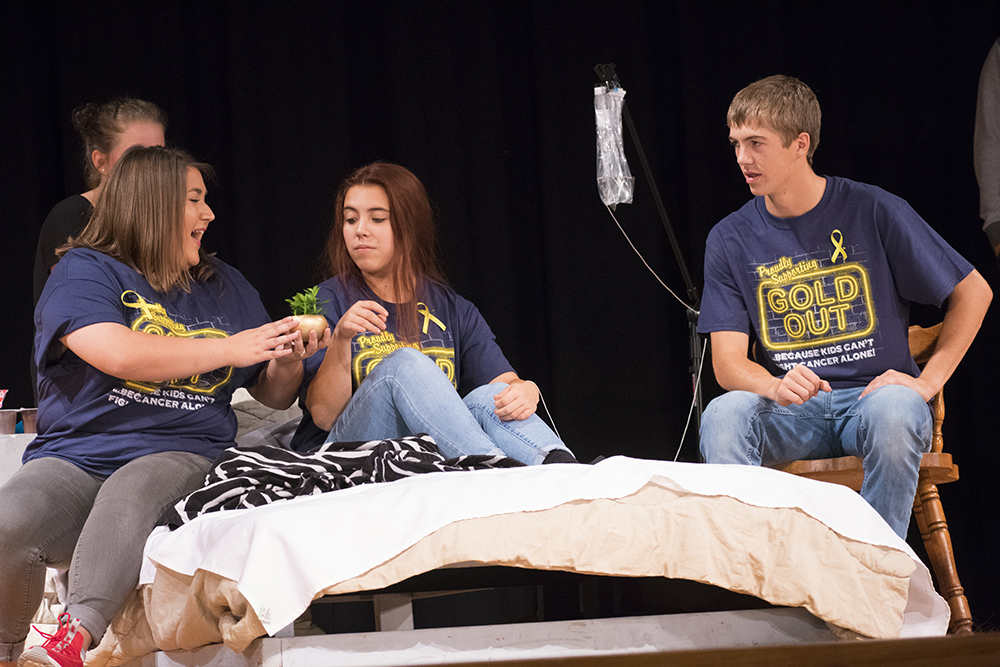 COAHOMA - The Coahoma Bulldog varsity football team will be decked out in gold uniforms when they hit the field in Stanton Friday night against the Buffaloes as part of their efforts to raise funding for childhood cancer research facilities.

The new uniforms were debuted at a community assembly held Monday afternoon by the Coahoma High School theater department to spread the word about Gold Out, a fundraiser for childhood cancer research.
“Coahoma is going to go gold on Friday night and not just in the stands,” announced CISD Head Football Coach and Athletic Director Chris Joslin. “We are going to wear gold with our football uniforms. We have new jerseys for that one game. Also something that is pretty neat, the guy who is the father of the son this happened to shipped us 50 pairs of gold pants we are going to wear that night as well.”
Joslin is referring to Jeff Miller, the head football coach of the 2017 3A Division I Texas football champions the Rockdale High School Tigers, and a long time friend of Joslin and his wife, Kristen. In fact, Miller hired Joslin for his first coaching position in Jacksboro 16 years ago.
Miller’s son Gunner was diagnosed with an aggressive form of bone cancer, Ewing’s Sarcoma, when he was a freshman.
“The reason I am telling you this is because I want you to know how passionate we are about this,” Chris Joslin said before he told Gunner’s story. “I told the football team today and to them over and over, you never know when your last day of doing something is. This young man was running at the area track meet as a freshman and his leg was hurting bad….They went to the doctor for shin splints and before the visit was over the doctor told them it was cancer.”
The news meant an end to his high school football playing days but not an end to his football career. Instead of leading his team on the field as the quarterback, Gunner served as a student coach for the Tigers’ special teams. He was on the sidelines when the Tigers won the state football championship.
In fact, it was Gunner who snapped the final play of the game at his teammates’ request.
Gunner’s mother, Angel, along with Kelly Pickel, who had a child struck with cancer, started Gold Out about four years ago after learning childhood cancer research doesn’t receive much fundraising dollars. In the past four years, Gold Out has raised more than $200,000 from various participating schools in Central, East, and South Texas. The organization hopes to raise $100,000 this year alone.
Now the Joslins want to bring that movement West.
“You guys are going to be the first school that is going to be involved with it in West Texas,” Chris Joslin said. “We want more schools to get on board.”
During the assembly, the theater department put on an endearing play called “Red Rover” about a young girl fighting cancer. The production was researched, picked, and produced completely by the theater students, said Kristen Joslin, theater advisor.
Gold Out shirts are being sold for $10 a piece to the end of this week and during the football game at Stanton Friday. Already, the theater department has had to reorder shirts to meet a growing demand. For each shirt sold, $7 will be donated to a childhood cancer research facility while $3 will go to covering the cost of the shirt.
On Friday, the theater department will host a special pre-game event to honor survivors of childhood cancer.
“I am really excited to do this,” said Joe Manning, theater student and varsity football member. “We’ve been working hard at it. There has been a lot of time put into this.”
The Bulldogs will face off against the Buffaloes at 7:30 p.m. Friday in Stanton.